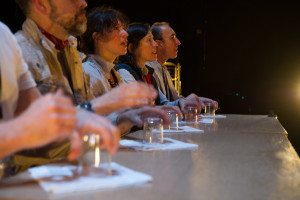 With a team of collaborators I create concerts, song-theatre performances, site-specific works and empowering experiences.  At the heart of my theatre and music world is songwriting and singing.

Recordings I love to set great poetry, and my albums are full of these songs. I also work to commission.

Music for Theatre and on Air: For many years I composed and arranged songs for theatre including for the RSC , the  NT, Shared Experience, the Royal Court, Katie Mitchell, Simon McBurney, Michael Thomas, the BBC, the Royal Shakespeare Company, the Royal Court and the National Theatre. Commissions in the time of covid include songs for online theatre on film Nothing On Earth – shorts and for the Wye Valley Will It Ever Be The Same Again?

Coaching: My longest ever freelance job was a blissful seventeen years attached a few hours here and there to the National Theatre Studio doing warm ups, voice work and running a choir for actors and NT company members and staff. I’ve also taught at RADA, Central, LAMDA, Rose Bruford, Goldsmiths, for community choirs, run songwriting workshops and taught in over twenty countries, sometimes in my rough Spanish, French, Italian, German as well as my voice teacher’s mime. Now I also coach for Dramatic Resources

Sing For Water: Along the way, I dreamed up Sing for Water,  founded as a mass choir singing project with Thames Festival to raise money for WaterAid.

Awards: A President’s Award from WaterAid and an Honorary Fellowship from Dartington College of Arts.

Formative Experiences: often hearing King’s College choir sing evensong, growing up with languages, at Dartington College – devising theatre, at Dr Fosters – creating and touring community theatre, with Cardiff Laboratory Theatre – touring physical theatre internationally, being a long term part of the Magdalena Project international network of women who create theatre, being taught by Bardy Thomas on the Voice Course at Central, being in rehearsal rooms with Peter Gill at the NT Studio, working with sound engineer Jon Wilkinson on multiple albums, touring Meredith Monk’s music around Wales with some of her ensemble, doing the music for shows by Katie Mitchell and Simon McBurney, three field trips with Georgian ethnomusicologists in the Caucuses, singing in the LA Warner lot on the film Troy ……..