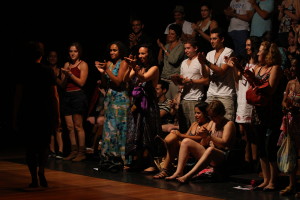 Without places to create, and the support to take risks, little of the song theatre aspect of our work can be developed.

Among the many festivals and venues who have greatly helped us by commissioning new work are BAC with Tom Morris and Emma Stenning, the Royal Opera House‘s ROH2 with Deborah Bull, Alison Duthie and John Lloyd Davies, Salisbury Festival with Maria Bota, Greenwich+Docklands International Festival with Bradley Hemmings and Matthew Jones, Sage Gateshead with Katherine Zeserson and Ros Rigby, New Writing North, Beyond The Border with David Ambrose, the Getty Villa LA and Norman Frisch, the Royal Shakespeare Company with Geraldine Collinge, The World Famous with Pippa Bailey, Xtrax and Maggie Clarke and Anaïs Biaux, Thames Festival with Adrian Evans, Kate Forde and Catherine Reiser, Tete a Tete and Bill Bankes Jones, The Magdalena Project, Birmingham Rep and the National Theatre Studio.

Funding Bodies and Donors
including the Arts Council, anon.

Choir Leaders
Many of our performances’ audiences and sometimes venues are connected to the web of community choirs around the UK. Thanks to all those who organise performances and workshops.

Composing Residency Hosts
Songs and show structures have been developed in composing residencies funded and hosted by Hawkwood College with Alicia Carey and Katie Lloyd Nunn and by Fundacion Valparaiso with Beatrice Beckett.

Deep thanks to you all!!