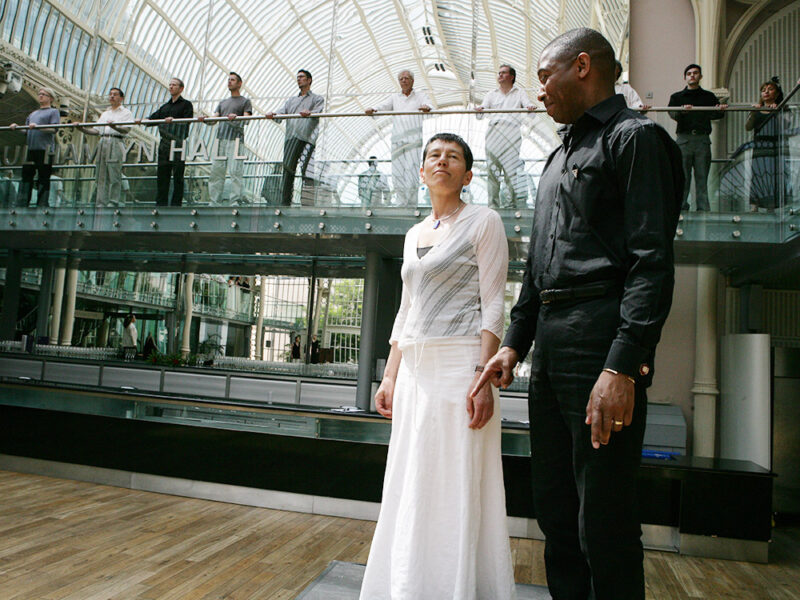 I’ve just released a new album and am currently working on two albums, one with a pianist and one with other singers and the music for two theatre projects and laying the ground for the next song theatre show.

What I love to do

As a songwriter, singer and composer, with a background in theatre, I compose for concerts and to commission for song-theatre shows, site-specific choral events, opera, dance and theatre. I also love recording albums. I also love running creativity, singing and songwriting workshops.

I spent my childhood dancing and playing the piano and then went to study theatre and dance. The focus was on creating and devising group theatre, and it was then I wrote my first song.

Creating performances
After college, five of us set up a collective where we tumbled theatre out of the back of a transit van into pubs, schools and village halls. It was a period of continuous collective creation and collaboration. Those years were the most powerful training I ever had and led me to touring Europe with a physical theatre company where I was inspired by meeting other companies who created their own shows from scratch in many forms and languages.

Theatre and Singing
As I loved singing and songwriting, I joined a voice course which led me to the National Theatre Studio. There I ran a weekly voice and body class for actors and took part in many theatre development projects. Through that building I was inspired by some incredible directors and met and made friends with people I still work with today.

Song-theatre
While my life splurged into working with other theatre companies, drama schools, choirs and abroad, I was always doing concerts and making shows. I also worked on shows with directors such as Simon McBurney, Katie Mitchell and Lloyd Newson.  In the last few years I have started to call them “song-theatre” as all of them have songs at their heart, and yet are theatre, but they are not what we know of as music theatre.

Choreographers
I was inspired by the choreographers Liam Steel and Steven Hoggett and we started collaborating on song cycles based on testimonies.  My love of creating through the body, which came from childhood, found its way back into my work thanks to them. I’ve recently composed for Luca Sylvestrini at Protein Dance.

Recording Songs
My world is theatre but the core content is song. I was always writing songs and started to record them with Jon Wilkinson, a sound engineer to whom I am deeply grateful as we made ten albums together and he gave me the confidence to put my songs down into audio form. I am still in the process of releasing songs that I recorded with Jon, alongside newer work.

Collaboration
Without collaboration, collaborators and supporters, none of what you find in these pages would have been possible. Great thanks to each and every one. Collaborators include The Voice Project.  I run also workshops online with Katherine Zeserson (Autumn Turning) and Philip Cowell (Words into Songs.)

Influences
Hearing King’s College choir sing evensong; devising community theatre; touring physical theatre internationally; being part of the Magdalena Project – an international network of women who create theatre; singing Meredith Monk’s music around Wales with some of her ensemble; three field trips to meet Georgian singers in the Caucuses; singing on the film Troy on the LA Warner lot; growing up with two parents who could speak or read other languages, who were curious and engaged, and who welcomed people from all over the world into our home.

Languages
I speak reasonable French, understand and speak some German and Spanish, less but some Italian as well as understanding a little Russian and Georgian. I have also performed or taught in languages I don’t speak (!) like Portuguese and Italian.