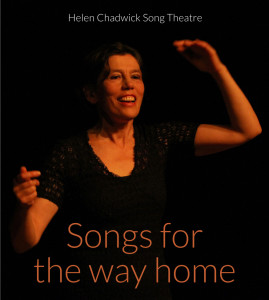 SONGS FOR THE WAY HOME
A cycle of stunning harmony songs inspired by interviews with Helen’s neighbours in her local community in East London, where many different cultures co-exist.
For some, home means life in a new country, escape from a war zone, or arrival from a destroyed homeland. For others, the tales are more domestic, sometimes quirky and funny.
This trio performance tells stories in song around ideas of roots, displacement, and belonging and includes stunning harmony songs, body percussion and witty choreography.

SONGS FOR THE WAY HOME
is a trio concert version of DALSTON SONGS, developed at BAC and later commissioned by the Royal Opera House in 2008 and remounted in 2010. It is based on interviews with my neighbours in East London.

VIDEO CLIPS from the original production of DALSTON SONGS